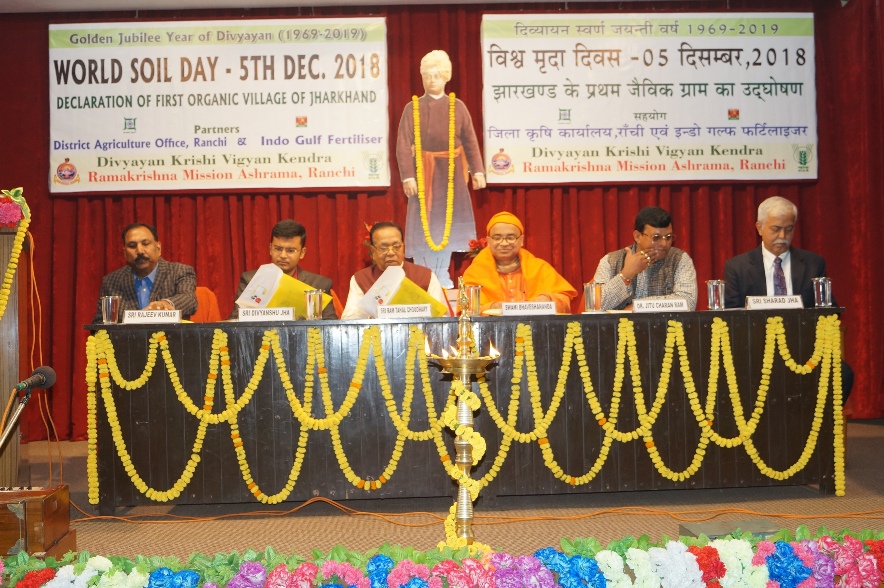 WORLD SOIL DAY-2018 was observed on 05th December 2018 with an aim to create awareness among the people and particularly among the farmers to save and conserve one of the precious natural resources i.e. soil which forms the basis for sustenance of life on the earth.

The workshop-cum-meeting was keenly participated by the different stake holders like scientists of Divyayan KVK, Professors, lectures and students of Ramakrishna Mission Vivekananda University, representatives of different fertilizer companies and 250 farmers of Ranchi and Palamau district.

The programme consisted of address by the guests to the participating farmers, Scientist-farmer interaction, experience sharing of farmers and representative of marketing company for Organic farm produce and distribution of Soil Health Card to the farmers.

The most important event of the programme was the declaration of “First Organic Village of Jharkhand”. The Village Dhurleta of Angara Block under Ranchi District was declared as the First Organic Village of Jharkhand. The farmers of the village were given the certificates issued by National Centre of Organic Farming (NCOF), Ghaziabad. It was a dream of Divyayan Krishi Vigyan Kendra(KVK), Ramakrishna Mission Ashrama, Morabadi, Ranchi to motivate and skill the  farmers towards adopting organic farming since the year 2006 which is slowly becoming a relaity. To achieve this, Divyayan KVK  first converted all its farms into organic farm. Then under the Tribal Sub Plan (TSP) programmes the farmers were trained and provided infrastructural facilities like vermin compost tanks, Nadep tanks, drums for liquid fertilizers etc.