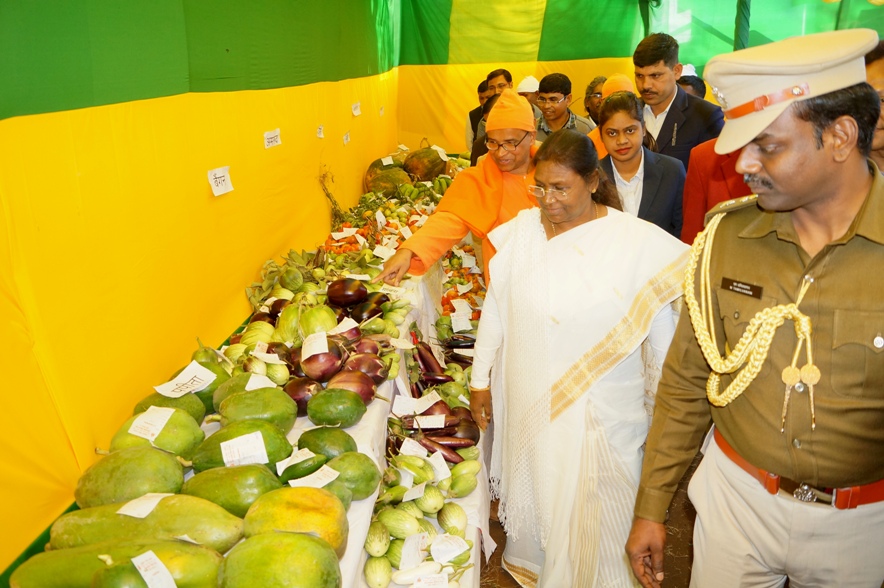 ‘Organic Farming- Successful Farmer- Prosperous Nation’ based on this theme, like every year this year also a two day long Central KisanMela ( 23rd and 24th Jan. 2017) was organized at  Getalsud Farm of Angara Block in Ranchi District by the joint collaboration of Ramakrishna Mission Ashrama, Divayayan KVK, Morabadi, Ranchi and 33 Vivekananda Seva Sanghas of Angara Block.

The main objectives of the Mela were to introduce farmers with new technologies of agriculture, popularize organic farming and boost confidence among the farmer in adopting organic farming for the healthy environment and healthy society without losing productivity and to demonstrate low cost implements to reduce drudgery and increase agricultural productivity.

To meet the above objectives stalls, models, live demonstrations, audio-visual shows, charts, posters and two Kisan Gosthi were organized during the Kisan Mela. All the events and shows were conducted in local/Hindi languages to get through to the farmers. 22 scientists from the Agricultural Universities and research institutions, KVK were invited during the mela to have direct interaction with the farmers.

Though the mela was opened to the farmers since 8:00 am on 23rd January, 2017 but it was formally inaugurated at 1:00 pm on the same day by the chief guest  Sri Ramtahal Choudhury, Hon’ble Member of Parliament in gracious presence of other dignitaries like Sri Subrat Mondal CGM, NABARD; Sri Ram Kumar, Hon’ble MLA; Sri Vikas Kumar, District Agriculture Officer; Smt. Anita Gadi, Prakhand Pramukh, Angara block; B.D.O. Angara Block etc. After the inauguration, all the guests visited the stalls put on by Divyayan KVK and other agencies.

All the guests lauded the contribution of Ramakrishna Mission for the growth and development of Agricultural and allied sector in Ranchi and adjoining districts.

Around 16000 farmers attended in both the days of the mela. 83 farmers were awarded for their best produce, Sri Sandip Bedia was awarded as the best farmer and Bhantboreya Vivekananda Seva Sangha was awarded as the best Vivekananda Seva Sangh for its outstanding contribution and activities for the integrated development of their village and locality.

The Mela was very successful in transferring the technologies to farmers and bring awareness among the farmers .